Enter Enver Halil Hoxha...Albania's hardcore socialist leader for 40+years. A self proclaimed Marxist-Leninist and admire of Joseph Stalin. He was known for removing any and all political competition, and pushed for an atheist style religion free state. Any opposition was typically met with severe penalty and quick swift judgment. He had a secret police force known as the Sigurimi, a police force much like the Nazi SS. After World War 2 and the break with Yugoslavia, Hoxha befriended the Russians. Russia gave Albania aid in monetary support as well as techincal and inner infrastructure support. Russian support lasted only so long, with the death of Stalin, and the emergance of Nikita Khrushchev, things started to sour. In 1956, Hoxha visited China, which also starting to feel the strain from Khrushchev.  By 1961, the Russian relationship was strained to the point Hoxha gave a speech stating that Khrushchev was a "revisionist, an anti-Marxist and a defeatist." Around this same time, the Warsaw pact nations, including the Soviets more or less pulled away from Albania, Albania was still a member, but not supporting, nor receiving support. In 1964, when Leonid Brezhnev took power, he made no attempt to deal with Albania. Finally in 1968, Albania fully withdrew from the Pact.

Now, in 1956, because the rest of the Communist party's were becoming liberal, Hoxha sought out relations with Chairman Mao in China. China had at the same time snubbed the Russians, who were becoming increasingly liberal, the Sino-Soviet split was full on in 1960. Maoism was right up Hoxha's alley, strict communist control. During the Sino Albanian years, the two nations traded heavily, and China provided Albania with weaponry. This is where the Sino-Banian weapons are believed to come from. The Chinese provided Type 56 SKSs, Type 63s and Type 53 Mosins. Albania got the license to produce the SKS in 1962. The Chinese are also believed to help them set up manufacturing of the SKS some time in the '60's, the Type 56-1 Albanian SKS went into production in the late 60's. Then by 1971, the Albanian/Chinese relationship had started to falter, China was slowly reforming to less extreme Communism. When Richard Nixion visted China in the early 70's, this marked the beginning of the end. Then in 1976 when Mao died, the Albanian/Chinese relationship was on it's last leg, finally in 1978, the Chinese support ended.

Now, Albania was pretty much alone in the world, and as time passed, they had rekindled some trade with neighboring nations, but on limited basis. Still ruled by a some say tyrant, others would say a paranoid madman. This link shows the lengths Hoxha went to protect his piece of the world. Awaiting the Enemy That Never Came: The Bunkers of Albania | Atlas Obscura
In 1985 Hoxha died, pretty much leaving Albania as one of the poorest nations left over from the Cold War. After Hoxha died, Ramiz Alia, the UN, NATO and other nations slowly helped the country recover. It saw some setbacks in the '90s, the Kosovo War had an effect on it, but now, it has a highly stabilized economy and population.

These were produced from 1967 to 1978 at the UM GRAMSH factory, located in Gramsh District in Albania. It was one of three state factory's for military equipment and weapons in Albania. There was a lapse in production from 1972 to 1975, which could be due to Albania's start up of the AK47 production or the time when they were purchasing/trading for the Type 63, or combination of both. All SKSs are typically dated, with the exception of the "no date" Albanian. The no date Albanian production is currently unknown, but the current thinking is they are the earliest, first made rifles. Also, the Albanian is, out of the big five producers, the least common variant. Remaining numbers imported are estimated to be a few thousand, total production is estimated to be less than 20K rifles, some estimates are even less, less than 15k made, going by serial numbers.

In the early-mid 1990s when NATO was providing the country with assistance, it is thought most of the rifles were destroyed by NATO forces to prevent the arms from being sold to another nation or falling into hands of rebels or guerrilla fighters. This could also explain the low numbers remaining and/or imported.

1) The Albanian SKS biggest visual difference is an extended length stock and handguard. The stock is roughly about 2 inches longer than a standard SKS, and the handguard totally covers the gastube. The early years 1967 to 1969 have a stock finish very close to the early Chinese SKS. Later years, from 1970, the stocks are usually a fairly featureless beech wood with a orange tint, shades will vary some through the years.

This shows the variance in stock finishes 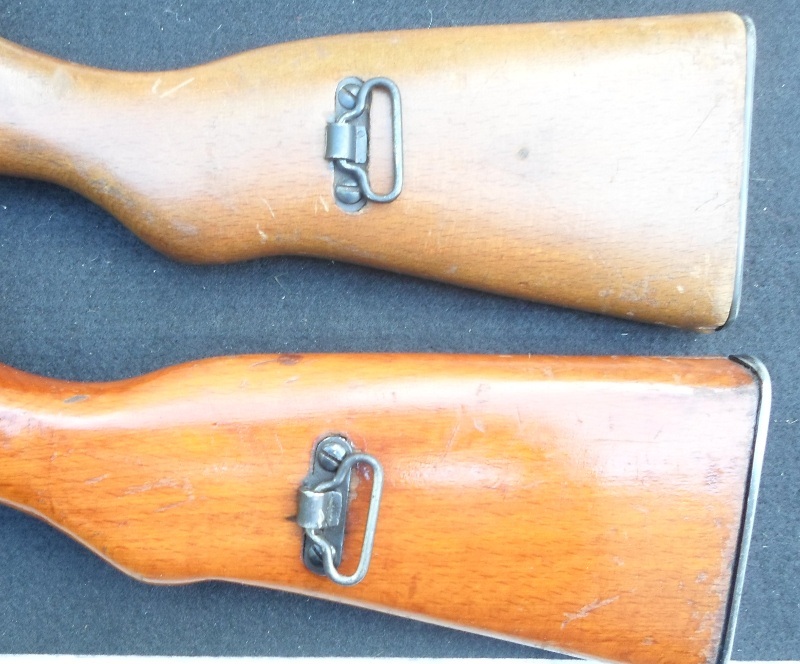 It is also been known to find names of soldiers, cities, and doodles on the stocks.

2) The charging handle, another obvious difference, a true question. It is AK style, but was it done due to the ease of machining, because troops were already familure with the AK style handle, or just truly to be different from the rest of the communist world. 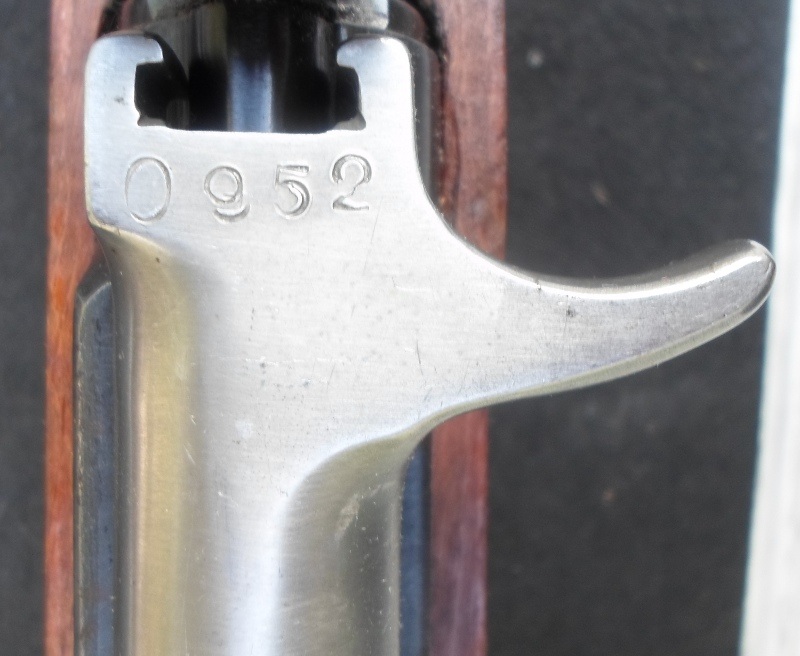 3)The butt plate has two holes, both spring loaded, one for the cleaning kit, one is suspected for the Albanian issued oil/cleaning solvent bottle.

4)The Albanian gastube, has a slight modification, it has 3 vents on either side, not the typical 1 vent hole per side. This change could be a durability or a performance upgrade. It adds redundant vents to allow air, water or carbon debris to escape, much like the AK usually has 3 ports per side on the gas tube.

A few shots of the gas tube, compared with a standard Chinese. With slight fitting they are interchangeable. The Albanian handguard looks longer, but it is the same length, also note electro-penciled serial 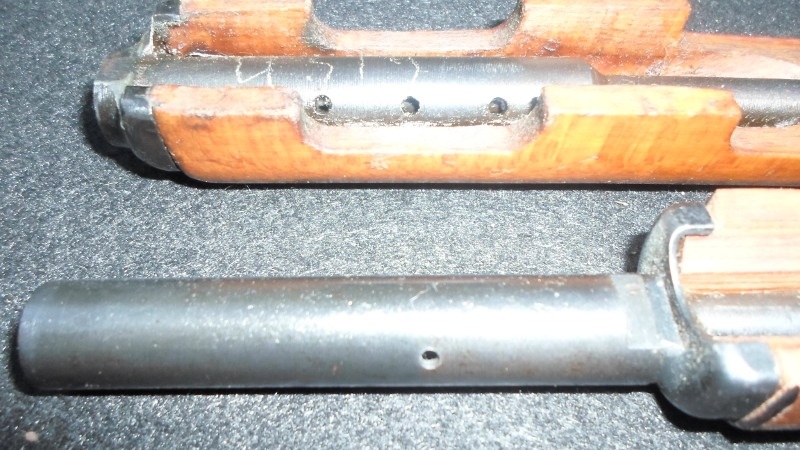 5)The 10 round fixed magazine on the Albanian has a slightly different bottom profile than those on other SKS's. Note the curve in the hinge vs. the straight area.

The Albanian box mag has a rounded body, where a standard box magazine is straight across the bottom, Chinese in this instance. Also, this provides another view of the Ak style charging handle. 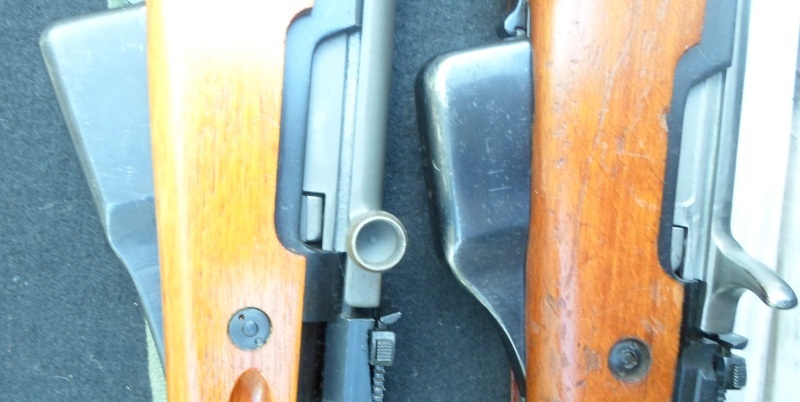 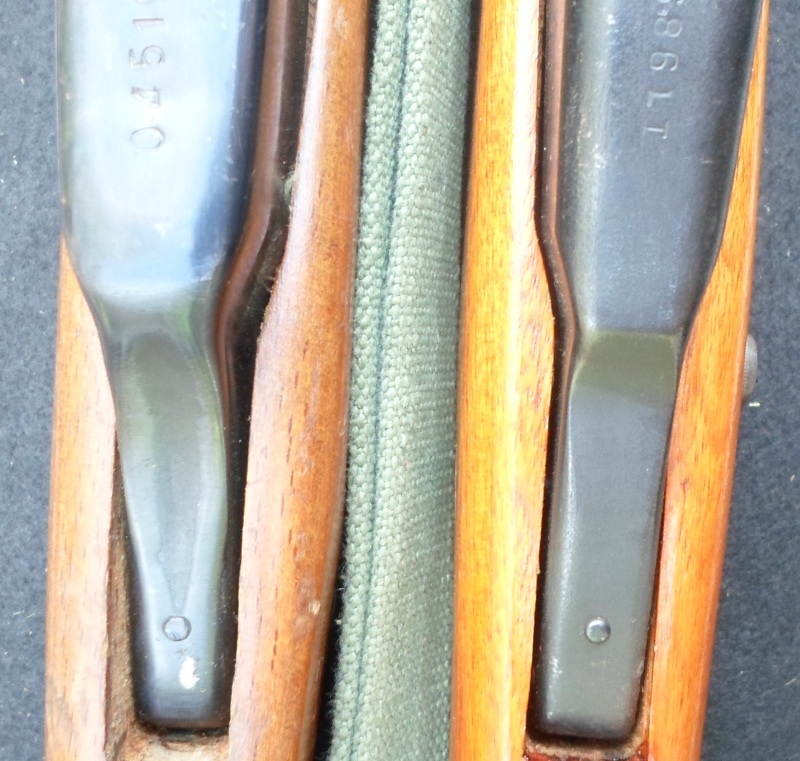 6) The Albanian rear sling swivel is located on the left side of the butt stock, much like the early Chinese, as compared to the bottom of the butt stock on other nations and later Chinese models. 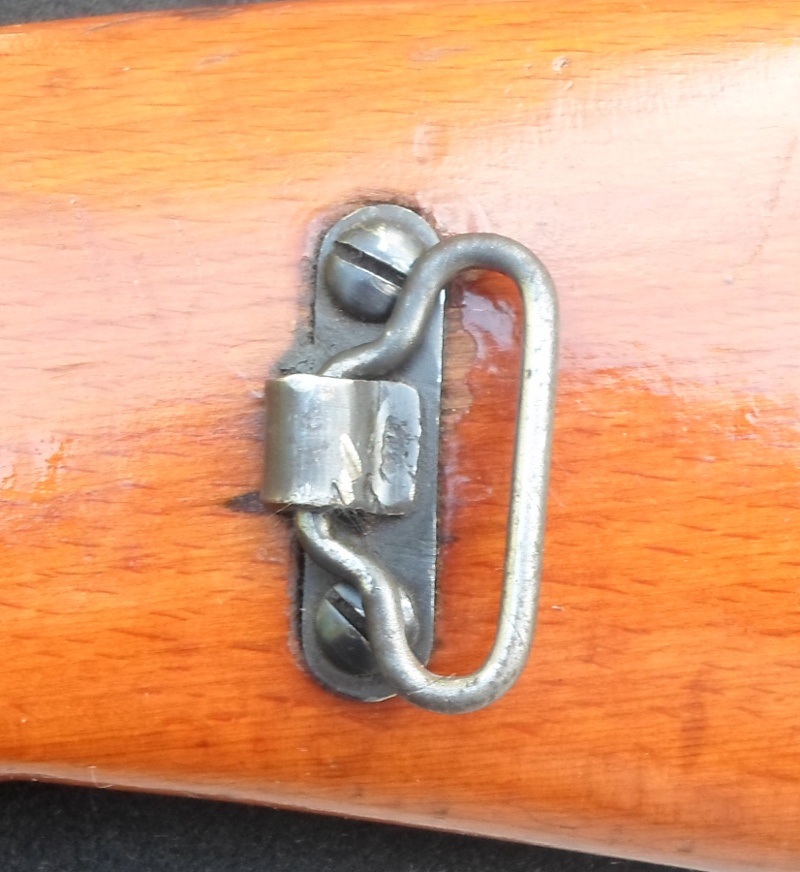 7) The bayonet on Albanian SKS are all black but use a spike type bayonet similar to the ones on Chinese SKS except for the color and design of the blood grooves. 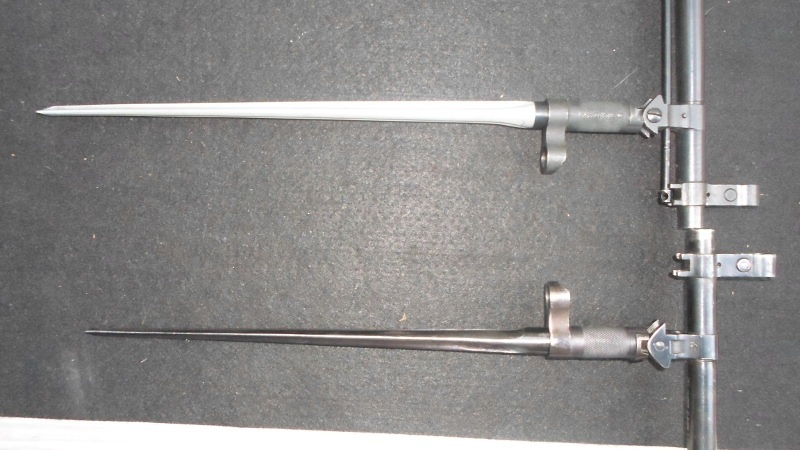 8- The quality and machine work varies wildly on these rifles. Some will be fitted and finished as nice as a Russian or be machined roughly, have sloppy workmanship worse than any other nation. Quality control must have not been much, if it fired and operated, thats the goal it seems.

9) like most SKSs the bore is chrome lined, most all parts are interchangeable with other SKSs, with the exception of the stock.

10)  Contrary to a popular misconception, Albania has one national holiday in July, July 18 End of Ramadan, nothing on July 10 or any other day in July. Albania recognizes their Independence Day which is actually celebrated on Nov. 28 followed by Liberation Day on Nov. 29.

Instead of separate stock ferrule and gas block, Albania combined the two into one. 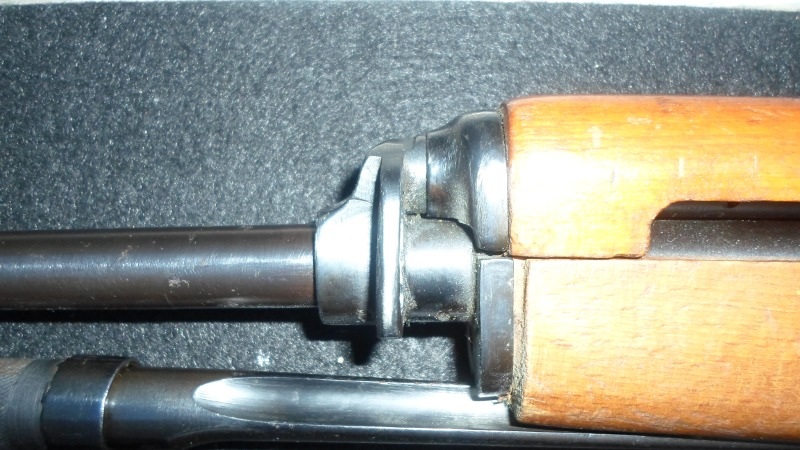 Rifle with Albanian ammo bandoleer, sling oil bottle and cleaning kit, and a replacement unfitted stock. All are pretty much copies of the Chinese design 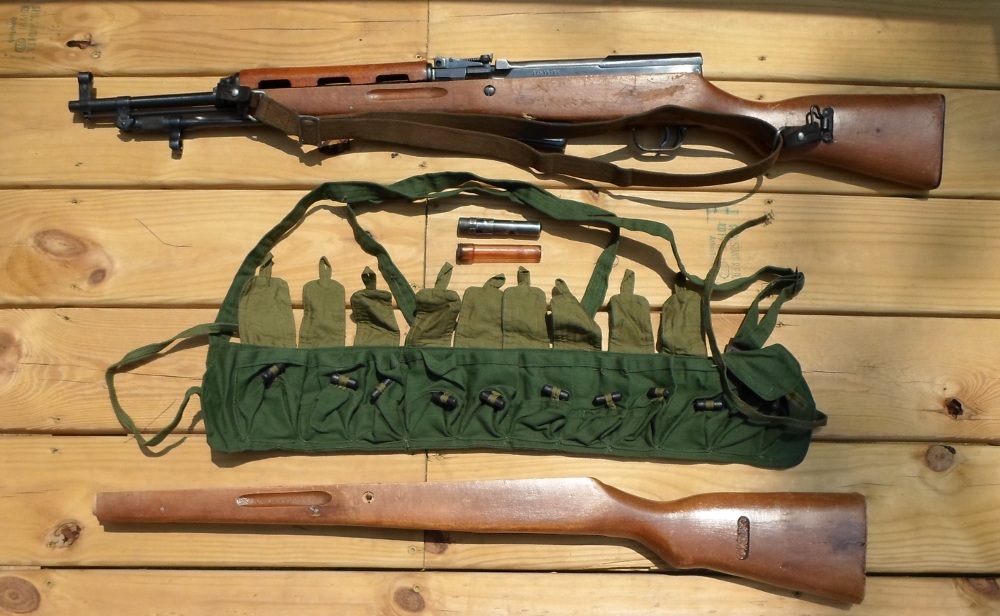